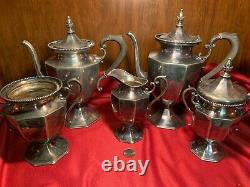 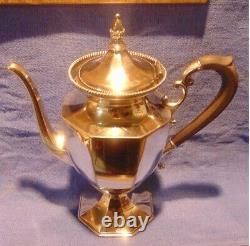 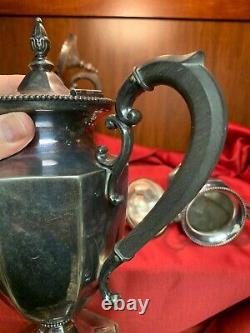 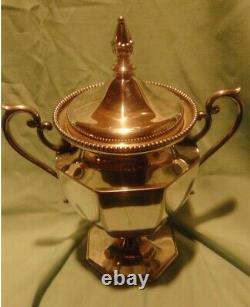 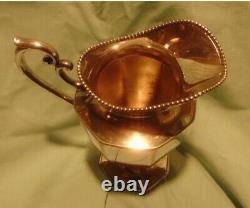 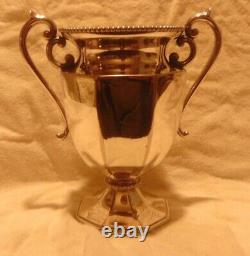 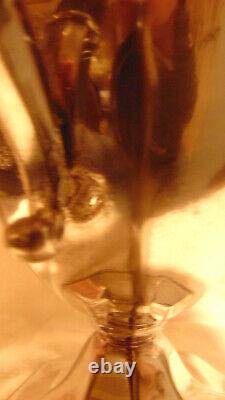 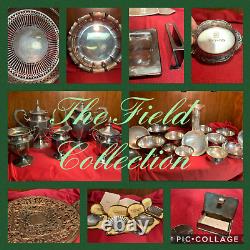 Our team was able to polish the set so you will see the before (tarnished) and after (first polish) views in the photos. The set became so shiny that it picked up every color it came close to. Some of the photos even make the set look gold when it was placed close to the drapery.

Unfortunately we did find a wear through mark on the Coffee Pot bottom of handle where it appears that someone attempted but failed at a surface repair - it also shows that the handle on the Coffee pot is slightly damaged at the meeting point with the vessel. These discoveries rule out the ability to fill the Coffee pot with liquid - Outcome - this is a looking piece not a using piece - it does appear that it can be repaired (we will not attempt this repair so this item in the 5 piece set is the only non functioning piece). This is a wonderful set that kept polished will brighten any room - its a lookn set. Derby Silver Company From Wikipedia, the free encyclopedia Founded 1872 Defunct 1933 Headquarters Derby, Connecticut; Shelton, Connecticut, United States Area served Internationally Products silver products, hollowware and flatware Divisions Victor Silver Company. In 1872, the Derby Silver Company began production in Derby, CT.

As of 1893, the President and Manager of the Company was Watson J. Clark was the Secretary and Treasurer. In 1898, the Company became a division of the International Silver Company headquartered in Meriden, CT, but continued making silver with its brand name until 1933, when the plant was closed.

Derby Silver Company designs are in a variety of museum collections including the Brooklyn Museum; Mint Museum in Charlotte, NC; the Museum of Fine Arts, Boston; the Wolfsonian-FIU in Miami Beach; and the Yale University Art Gallery in New Haven, CT. The Derby Silver Company, Courtesy of the Derby Connecticut Historical Society. The Derby Silver Company was founded in 1872 and began operations on Sheltons Canal Street one year later. The Company soon outgrew its quarters and, in 1877, constructed a larger building, which still stands on Bridge Street, Shelton, near the Housatonic River, overlooking Derby.

A number of additions were completed in subsequent years. The original Canal Street building was razed when the railroad was built through Shelton in 1888.

The Company made toilet articles, mirrors, combs, clocks, brushes, tableware and flatware, tea sets, childrens cups, loving cups (trophies), candlesticks, fruit baskets, dishes, basically anything which was plated by or made of silver. Special orders were constantly commissioned as well. The factory manufactured items for the Sperry and Hutchinson trading stamp stores. Showrooms were established in New York City, Chicago, and San Francisco. The logo at the time featured an anchor, often with the words Derby Silver Company or its initials surrounding it.

This article originally appeared on the Derby Historical Societys website. These, along with Field family heirlooms, are all being offered to the public. We are currently managing the Bertram Backstrom Collection, the Dr. Jan Figley Estate, and assorted family memorabilia & collectables.

Our pictures of the actual items are not altered or filtered to hide flaws, so please use these photos as part of the description. Many of our articles have some typical signs of use, such as light surface scratches, polish residue, and possible tarnish. Most of our things are vintage and antique, which are used or aged. Many of our articles have not been polished and retain their original patina. #SterlingSilver #Silver #Plate #Pewter #EnglishSilverMfgCorp #MadeInUSA #SilverPlate #ServingBowl #FieldFamilyEstate #yachting #plaques #trophies #LovingCups #heirlooms #Unkyan #BertramBackstromCollection #DrJanFigleyEstate #memorabilia #vintage #Antique.

The item "Coffee & Tea Service Derby Silver Co, Quadruple Plate, Five Piece, series 1683" is in sale since Monday, July 5, 2021. This item is in the category "Antiques\Silver\Silverplate\Other Antique Silverplate". The seller is "unkyan" and is located in Huntington Station, New York. This item can be shipped to United States.